10 Things to Know about a Centrifugal Clutch 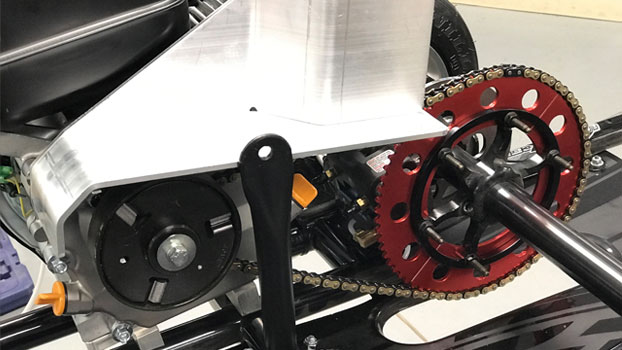 1. How does a go kart clutch work?
The clutch is an automatic transmission that is activated by the increased rpm of the engine.
The clutch should not engage when the kart is at idle.
The engine manufacturer sets the idle speed of an engine at the factory. The idle speed of the engine is normally around 1,650 rpm +/- 200 rpm.
2. Avoid Heat Damage
By properly oiling your clutch you can avoid heat damage. When heat damage occurs, the clutch will never disengage and the machine will start taking off by itself as soon as you start the engine. You can see heat damage inside the clutch drum, the metal turns from black to a blue color. The clutch must be replaced if it has heat damage and won't disengage. Heat damage is never covered by warranty.
3. Oil The Bushing
Oil the bushing that is located in the sprocket at least every two (2) hours of driving time.
You'll have to oil the clutch even more often if you have small children, riding in a small area, never going fast enough to engage the clutch all the way. The clutch continues to generate heat until it engages.
4. How do I oil the clutch?
Behind the snap ring, next to the sprocket teeth at the end of the clutch. There's an internal bronze bushing behind the snap ring that requires lubrication and it's up to you to put it there each time. With the engine off, squirt several drops of oil behind the snap ring while the bushing is warm.You can also oil the clutch before you ride, oil the clutch and give the oil a few mintues to penetrate down into the bushing, if you don't give the oil time to get down to the bushing, the oil will just fling off which is the same as not oiling it at all because the oil never reaches the bushing.

Don't put oil inside the clutch. The holes on the drum are to let the hot air out of the clutch. DON'T SQUIRT OIL IN THESE HOLES! When oil gets in the drum portion of the clutch it will cause excessive slippage, which means undue heat will be generated.
5. What oil should I use?
A good automotive oil like 10W30 or a straight 30 weight oil is perfect. It's a good idea to oil the chain at the same time. If the chain gets kinky from lack of oil it should be replaced before it damages the clutch sprocket. A new chain is cheaper than a new clutch.
6. Some of the driving habits that can ruin a clutch are:
Driving too slowly. A clutch starts to engage around 2,000 rpm and will lock up around 2,600 rpm. Driving at full throttle gives the clutch a chance to cool down. Full throttle locks the shoes in the clutch against the drum. When the clutch is not locked up, the shoes slip against the drum causing tremendous heat which dries up the lubrication in the oil impregnated bushing. The tremendous amount of heat generated can also anneal the spring which is the heart of the clutch. If the shoes turn purple from excessive heat more than likely the clutch is ruined and the spring no longer has the ability to pull back the shoes at idle.
Short stop and go driving. The longer you drive at full throttle the better off it is for the clutch, because it gives it a chance to cool off before the next engagement.
Driving with the foot on the brake. This is a problem with new drivers that are unsure of themselves. When riding a go-kart for the first time, try to find an open area that has no obstacles that you have to maneuver around until you get use to the brake and gas pedals. The driver must first be able to build up his or her confidence on the kart before putting obstacles in their path. A small back yard is not a good place to learn to drive a go-kart. In my opinion, a minimum of ¾ of an acre is the yard needed for a go kart. Teach your child to drive with one foot on the pedal—be it the brake or the gas but not to press on both pedals at the same time. You either want to go or to stop but you cannot do them both at the same time.
Changing the size of the tires. Putting on tires that are larger than what came with the kart will result in clutch problems. Tires exceeding 13" in diameter stress out a clutch if the kart is not properly geared for the larger tires. If you are driving on smooth flat terrain than you may be able to get by with 14" tires but once you get on hilly terrain, deep grass, then you are putting additional strain on the clutch, which will cause premature wear. Big tires look neat on a go-kart but you create your own problem changing to a bigger tire when the clutch isn't designed to handle them.
Weight. A centrifugal clutch is designed to be able to move a certain amount of weight. Once the weight limit is exceeded, then the life of the clutch will be shortened. A good rule of thumb is the kart and driver (and passenger when it is a two seat kart) should not exceed 400 pounds. The kart weighs around 150 pounds add to this the driver (and passenger weight, if it is a two seater kart). If you know ahead of time that you will exceed the 400 pounds then buy a torque converter go-kart and avoid the problems of burning up the clutch asking it to do more than it was designed for.
Gear ratio. The sprocket on the engine and the one on the rear axle should have a ratio close to 1:6. This means for every tooth on the clutch there are six teeth on the rear sprocket. So if you count 10 teeth on the clutch there should be 60 teeth on the rear sprocket. (12 teeth on the clutch means a 72 teeth rear sprocket). A torque converter has a variable speed system between the driver and the driven pulleys so it can improve upon this ratio, which gives the torque converter an advantage over a straight clutch system. It improves the ratio by approximately 3:1 and can turn larger tires and drive at slower speeds without doing any damage to the clutch system. A torque converter is a more expensive system initially but it will last longer and is more trouble free when maintained.
Restrictions. Don't try and reduce a go-kart speed by limiting the travel of the gas pedal or by putting a restrictor in the carburetor to limit full rpm. Either of these methods will result in the clutch slipping, which is self-destructive. A clutch needs full rpm to lock up as quickly as possible to be able to start to cool down. To slow down a go-kart you would need to purchase a gear reduction unit, which is like training wheels on a go-kart until the driver gets use to how the go-kart handles. A gear reduction unit can reduce the speed of the go-kart in half.
7. If your kart has a grease fitting in the crankshaft?
If your kart has a grease fitting in the crankshaft for lubrication then a shot of grease once a month should be sufficient lubrication.

The grease is coming from the inside of the sprocket outward, which is a better way to lubricate the clutch. The keyway in the crankshaft acts as a reservoir for the grease, which cuts down on the frequency needed for maintenance compared to oiling the snap ring area.

The chain still needs to be oiled frequently to keep it from kinking up. There are some excellent chain sprays available that are waxy and will not let sand and dirt adhere to them.

Dirt and sand will wear the chain as well as the sprockets.
8. How a chain affects your clutch?
Most chains for go karts stretch over time.

When the chain starts falling off the sprocket then it is time to move the engine forward or backward to take up the slack in the stretched chain.

There are four bolts that hold the engine on the motor mount plate. Take an open-end wrench and a socket wrench (most likely a 9/16") and loosen the four bolts- pull back the engine until you take up the slop in the chain.

Tighten the bolts back again but make sure the two sprockets are perfectly aligned with each other. You don't want the sprockets out of alignment because this will cause the chain to come off or wear the sprockets unevenly.Leave about a ½" of play between the top of the chain and the bottom—don't pull the engine back where the chain is a tight as you can get it. A tight chain can cause the kart to move in neutral with no one in the drivers seat.A tight chain puts friction on the bushing or roller bearing, which could cause it to engage when the engine is idling.
9. Educate the rider?
Teach your child how to do the maintenance on the kart and accept responsibility for its upkeep. Every second tank of gas in the kart is about the interval for oiling the chain and the bushing.
10. How long will the clutch last?
If it's installed on the engine crankshaft properly, without using the "magic hammer" to pound it on the shaft, using the right length key (1/2") and observing all the hints that are pointed out in this article, a clutch should last several years.

However if it's improperly installed, driven in abusive conditions (sand, steep terrain, excessive weight in the kart or rear tires taller than 15"), the clutch might only last 20 minutes. Go Karts with rear tires taller than 15" or an engine larger than 8hp require a torque converter.
BMI Karts and Parts has all the go kart clutches to gear up with! We have a large selection of go kart racing clutches, centrifugal clutches, go kart parts, and more!
Quick View